Shop limited edition and original art from emerging and established artists represented by our gallery.

Chow Ciao Chow is a Hong Kong artist who falls in love with portraiture paintings. Chow earned a Bachelor degree in fashion and textiles, then began his career with fashion design. After leaving the industry in 2014, Chow co-founded an experimental space called “MUM’s NOT HOME” with Makui, and began his full-time career as an artist.

Chow experiments with different colours on his portraiture to express different personalities, reminiscing the colourful makeup or an infrared thermal image. By adopting bold strokes of watercolour skilfully, he blends the vibrant colours in a balanced manner and captures the likeness in a portrait impeccably.

In 2018, Chow held his first solo exhibition “Collect Human Faces”, which featured 100 portraits. Since then, Chow focuses primarily on his work as a portrait artist with his “C.C.C. Commission Portrait” project. Chow’s work has been collected by many for its lively and colourful style and the joy it brings to the viewer.

In 2019, Chow continued his artistic creations by launching a new collection called “No More Sorrow”, which based on personal emotions. He sees the representation of tears and crying as a means to release one’s emotions, this series of work celebrates the positive energies, and fresh feelings resulted from a cathartic cry. 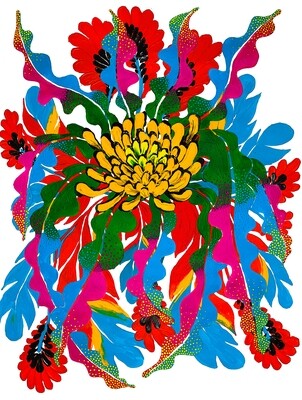